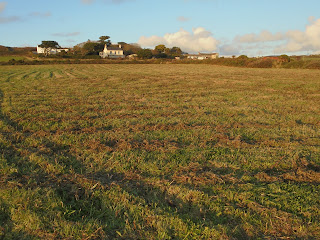 Four Acres used to be our best hay meadow until it was ploughed up and used for crops, but this year we have restored it as a hay meadow. This involved rotovating and rolling it in the spring to make it level, then allowing the native seed-bank to do its own work over the summer, and this week it has been "topped" to leave a short sward of grass and wildflower species, which will hopefully mean it is ready to be cut as hay or fodder next summer.