Jim and Hugh today finished digging over the inside of the new polytunnel, having been helped along the way by several volunteers over the past month. Couch grass spaghetti was the main problem, but there was Yorkshire fog, annual meadow grass, nettles, black nightshade, fat hen, dock, and cranesbills in there too.
Looking back to the far end of the tunnel we can already see bits of couch coming up again, only three weeks after it was dug out. Couch is indefatigable. Every little bit of discarded root will shoot again, so now we must go back over the ground and pick out the little bits. Then it's on to installing beds and irrigation before transplanting lettuces, pak choi, green sprouting calabrese, and sowing winter salads!
Posted by hugh at 12:19 PM No comments:

A composting demonstration site will be set up in the vegetable field during the morning on 13th December, by Guy from Cornwall Waste Action. He'll need help from a handful of willing volunteers, so please let us know (788454) if anyone is interested in lending a hand on the day. Thanks!
Posted by hugh at 12:11 PM No comments:

Our new polytunnel is now structurally complete! During a special session on Tuesday 1st November (thanks to all those people who turned up to help at such short notice - the weather was perfect and we just had to go for it) a team of volunteers got the polythene "skin" onto the frame, finishing by the light of mobile phones as darkness fell. The tunnel measures 16 by 60 feet, so that was quite a big piece of plastic to get on, so a great effort by all concerned.


Now all that remains to do is finish weeding the inside (we're almost there), prepare the beds and path, install irrigation, and transplant seedlings from the old tunnel into the new beds!
Posted by hugh at 1:57 PM No comments:

Many thanks go to Jaimie and Zoe, who swapped sunny Australia for damp Penwith and wwoofed on the farm for two and a half weeks in November. Thanks for all your hard work, and for donating your "travel-time" to come and help on the farm. Happy travels!
Posted by hugh at 10:30 AM No comments:

Entry written by John, who volunteered on the farm in May.

I spent two weeks working and living at Bosavern Farm as part of the Worldwide Opportunities on Organic Farms (WWOOF) scheme. While it would be impossible to convey every positive I took from the experience and still keep this account a reasonable length, I’ll try to relay exactly what I learnt from my time on the farm as well as try to get across why community farming projects like Bosavern are so important.
Perhaps the most widely known positive of community farming is its environmental impact, or rather lack of. When it comes to small community farms like Bosavern the distances involved in transporting food – from the ground, to the point of sale, to the consumer’s kitchen table - could in some cases be measured in mere metres. Supermarkets on the other hand are the antithesis of this low impact model. They often import vast quantities of food from abroad, a process heavily dependent on fossil fuels for transportation. They also operate a production network of increasingly centralised intensive farms, meaning even the produce grown in the UK has to travel cross country, by lorry, to get to supermarket stores, probably via large sorting warehouses. In a world of increasingly scarce natural resources and awareness of the importance of reducing the first world’s carbon footprint it’s a model that is no longer sustainable. Community farms cut food miles down to, potentially, zero. When working at Bosavern the potatoes I harvested travelled - from soil to the farm gate where they are sold – I think about 50 metres, by wheelbarrow, powered by me. If the customer then travels by foot to buy them from the gate those potatoes are effectively carbon neutral.
This reduced distance between a community farm and the customer is not just literal. The centralisation of our food system has created a disconnect between our food and where it comes from, meaning as a society we have no relationship with the people and land that produce our food. For many members of the public food simply appears on super market shelves as if by magic, they can’t put a human face to the people who sow, grow and harvest the crops they eat. This is convenient for the handful of companies that control our food system: when a customer buys a cheap tomato they think only about the price, the farmer who’s receiving an increasingly diminishing return for his crop is out of sight, and therefore out of mind. At Bosavern the majority of conversations members of the community had with Hugh were predictably about food; what was good that week, what crops would soon be harvested, which ones were coming along well, which were struggling a bit, how the weather was affecting production. Imagine asking the shelf stacker in Tesco’s how that season’s broad beans were maturing. Living in close proximity, and having access to where our food is produced reconnects us to its origin and produces a more empathetic relationship between the producer and consumer. Bosavern, through the volunteer and community aspects of the farm, has bridged this gap altogether, making consumer and producer almost one and the same.
Being a community farm creates a link of mutual interest between Bosavern and local residents. It also earns them the right to voice their opinion on how it’s run and encourages involvement in the day to day goings on at the farm, through volunteering and getting involved with fundraising or the educational activity days. This enfranchisement, the feeling of having an influence on something that matters (and what matters more than food!), encourages inclusion, provides a feeling of personal fulfilment and both creates and strengthens community ties. Volunteers at Bosavern and farms and institutions like it have the unique satisfaction of involvement at potentially all levels of production; they have a say on what’s grown, they can sow the seeds, harvest the crop, then have a say on where the money made through selling the produce goes.
Despite taking a keen interest in where my food came from before I arrived at the farm, I realised within hours of arriving how narrow my knowledge of vegetables actually was. Just by taking one quick circuit of the Poly-tunnel I was exposed to several varieties of salad that I’d never heard of, let along eaten. Mizuna and mibuna, both viable alternatives to the more common rocket for adding a peppery taste to salads, were two that spring to mind. On my first night there Hugh made a tasty spaghetti ‘chard-ongese’, I’d heard of chard but again I had no recollection of having eaten it before. This seems absurd when you consider how worthy a substitute it can be for spinach (tougher, less likely to wilt to nothing in your fridge within a couple of hours of purchasing). This of course reflects a truth that is well known in certain circles in the UK but not in the country as a whole; while supermarkets may give the illusion of choice the range of vegetables and foodstuffs on offer is actually very limited. Apples are a good example of this. Roughly 3000 different varieties of apples exist in the UK, however only a few are widely available in UK supermarkets. If we as a country embraced a wider variety of home-grown apples (and this goes for many other fruit and vegetables) we could vastly lessen our dependence on foreign imports. By aiming towards at least an ideal of community self-sufficiency farms like Bosavern encourage exploration; if you’re going to pursue a diet whereby locally grown produce makes up the majority of your ingredients, you’re going to have to widen your palette beyond what’s available in supermarkets. This opens up the opportunity to embark on a gastronomic journey of discovery, an exploration into new varieties of fruit and veg and culinary combinations, like Hugh’s ‘chard-ongese’, for instance!
JohnX
Posted by hugh at 10:26 AM No comments:

We are looking for good quality items to sell from our stall to raise money for the farm, at Pendeen Table Top Sale on Saturday 26th November, then St Just Town Hall Christmas Fair on Saturday 10th December. Items can be dropped off at the farmhouse. Ideally the items will be good enough for people to buy as Christmas gifts - home-made cake or jams would also be most welcome!
Posted by hugh at 10:43 AM No comments:

On October Friday 28th there were ghostly goings-on and spooky spine-tingling shivery shenanigans at St Just Rugby Club, as Bosavern Community Farm held our "Halloween Hextravaganza" there. The main attraction was a hog-roast of one of the three pigs raised on the farm through the year and recently slaughtered - two as "piggy shares" for friends of the farm, and the third for the Halloween hog-roast. And she was very tasty indeed.
As well as eating, there were fun and games in the form of welly-wanging, fancy dress, face-painting, tug-o-war, gooey gloop, a raffle, apple-bobbing, pumpkin carving - and of course the rugby club bar. 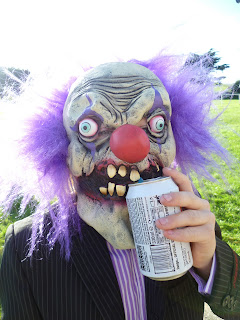 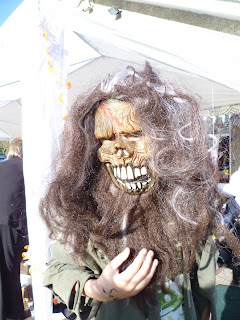 Becky, a long-term volunteer on the community farm, left recently to head back up north. Becky was here for four months, and was invaluable help during the busy times over summer, and in covering the days off of other staff. During her time here we brought in 200 more laying hens, 21 Christmas turkeys, started work on the new polytunnel, built up the veg boxes to 12 a week, sent our three little pigs to slaughter, hosted 13 wwoofers, and started switching our crop rotation from 2011 to 2012 planting - never a dull moment! Many thanks for all your help Becky, and we wish you all the best in your future endeavors.