On Wednesday 23rd March, Hugh gave a talk about the farm in St. Just Women's Institute Hall to the University of the Third Age (U3A), which went down well, with 14 people in attendance. One thing that came out of this talk was the realisation that very few people in the area know that Bosavern Community Farm, rather than being paid by Cornwall Council to run the farm on their behalf, actually pays a commercial rent to the council, all of which has to be raised through farm sales, fund raising, and external grants.
We are now hoping to organise a farm-tour and picnic for members of St. Just U3A in June. Thanks to U3A for inviting BCF to address them, and thanks to several of the members who sponsored chickens on the farm.
Posted by hugh at 10:56 AM No comments:

The regional gathering of WWOOF (Willing Workers On Organic Farms) hosts for the south-west of England was held at Bosavern Community Farm yesterday, Saturday 26th March. Although the turn-out was poor, with only two other hosts able to attend (the weather is too good to stop work these days!), the day was a positive one and enjoyed by all.
As well as our fellow WWOOF hosts we were joined by the regional host coordinator Abby and two of her friends, plus Charlotte from the inspirational Camel Community Supported Agriculture project (see their website at camel-csa.org.uk). The day began with a tour of the farm to see what developments have been made and what is planned for the future, with lots of opportunities for chatting and sharing experiences. Then it was back to The Hive for lunch, followed by a talk from Charlotte, for which we were joined by several farm volunteers who were given permission to stop digging for an hour....
The gathering continued with everybody working together to prepare two beds for onions out in the vegetable field, on a gorgeous afternoon, with 16 people quickly getting 2 beds weeded and dug over. Followed by a few well-deserved beers back in The Hive.
Many thanks to Abby for organising the day, Charlotte for coming to inspire us, and everybody else for turning up and helping make the day so fruitful and enjoyable.
Posted by hugh at 10:47 AM No comments:

No volunteering this Thursday.

On Thursday 31st March members of the Bosavern Community Farm team will be travelling up to The Community Farm in Bristol on a fact-finding mission, so regrettably we are having to cancel our regular Thursday volunteering session.
Posted by hugh at 10:28 AM No comments:

After eight volunteer sessions totalling 170 person-hours, we have finally succeeded in filling our potato strip with potatoes! This is a fantastic achievement, only possible thanks to the teams of volunteers who came along throughout March. Apart from ploughing the strip by tractor on January 1st, all the rest has been done by hand, using rakes, forks, trowels, trugs, and tape-measure, with a total of 190kg of seed potato going into the ground.
The potatoes, when harvested, will form the foundation of our vegetable-boxes when we start producing them later in the year. We have planted 6 different varieties of potato, namely Pentland Javelin (early earlies), Maris Peer (second earlies), Cosmos, Charlotte (salad potatoes), Ambo, and Sarpo Axona (blight-resistant maincrop potato). We'll be trialling which performs best on the farm, which produces the highest yield, which sells best, and of course which tastes best.
When we first began planting potatoes on March 2nd, the far end of the strip seemed very far away indeed, but we edged closer every session, until on March 24th we popped the last potato into the last hole of the last bed, and headed back to the farmhouse kitchen for a deserved cuppa. The celebratory beer arrived two days late, but was worth waiting for!
There are 49 beds of potatoes in all, each 10m long and 1.2m wide, with 0.5m paths in between the beds, so every part of every bed can be reached for working and weeding without stepping onto the bed. Now all that remains is to finish spreading composted horse manure onto the soil surface...
Posted by hugh at 10:25 AM No comments:

Thanks again to the Wild Penwith Volunteers, organised by Cornwall Wildlife Trust, who came to work on the farm for a day on Tuesday 22nd March, this time to begin construction of the new chicken runs. Although not strictly a "conservation" task they were keen to add fencing to their list of skills, and as always it's amazing what a team of enthusiastic people can accomplish in one day.
Since November we have had 50 chickens on the farm, who are now producing about three dozen eggs per day, and we are finding it difficult to supply the demand for them! So our plan is to have at least 100 more laying hens on the farm sometime in May, which means a lot of fencing work beforehand. Each flock needs two runs, so that they can be rotated between the two, allowing the grass in each to recover before the hens return. So we are now building fences for our current flock's second run, plus sufficient runs for two more flocks, to increase our egg production. Throughout April we will be interspersing chicken fencing sessions with vegetable bed digging sessions, so please come along and lend a hand!
Also thanks to pupils of St. Just Primary School who came down to the farm to measure out where the posts should go beforehand, as part of their maths class.
Posted by hugh at 9:59 AM No comments:

The next wildflower discovery walk will be held at 6pm on Wednesday April 13th, meeting at the market cross in the centre of St. Just. We'll walk across fields to the farm, search for wildflowers, and finish with a chance to buy fresh organic produce from the farm. Donations for the walk are welcome.
Posted by hugh at 9:05 AM No comments:

Yesterday, three people came to the farm for our Wildflower Discovery Walk, as advertised in the Cornishman. This meant a nice small group and a lot of interaction! Although not many flowers are poking their heads out this early in the year, we found quite a few, and identified others from their leaves and last year's flower heads (or fern fronds - and even the "yellow brain fungi" on gorse stems). Most were found in the far top field, where the most pronounced south-facing slope on the farm is.

Many thanks to Maud, our latest wwoofer, who left us on Monday after two weeks helping on the farm. Special thanks for getting up at 6am to help harvest salads for Pendeen Farmer's Market on Saturday 5th, plus of course all those potatoes planted and manure wheelbarrowed!
Posted by hugh at 2:41 PM No comments: 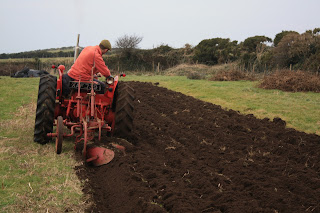 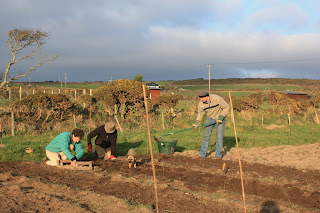 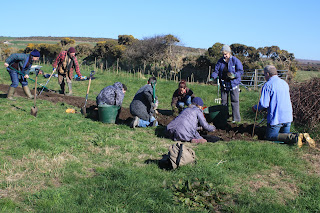 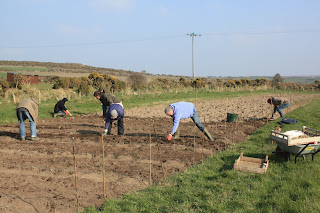 Saturday, we finished the raspberries by planting the final 20 canes. 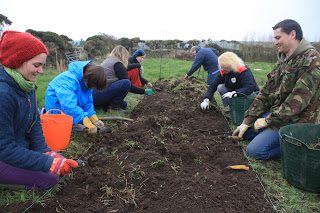 Celebration - pancake day came early as we rounded the week off in the farmhouse kitchen. 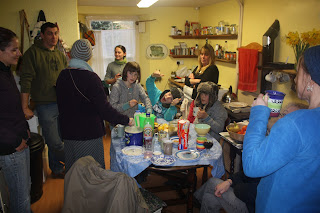 Many thanks to everyone who came along and helped make the week a spud-tastic planting success! We are now halfway through the potato planting, and should finish this week (weather permitting).....
Posted by hugh at 11:10 AM No comments:

At last it's here, Bosavern Community Farm Potato Planting Week! After a sodden January and February, where the seed-potatoes were put to chit in the spare bedroom instead of going into the ground, the first week of March looks promising, i.e. dry! So this week we are aiming to get all our potatoes in the ground, or as many as we can, and therefore we will be welcoming willing volunteers for some extra special potato sessions....

We look forward to seeing as many people as possible to lend a hand on the land. If interested please just turn up at the times above, or give Hugh a ring on 01736 788454.
Posted by hugh at 11:36 AM No comments: