As soon as this year's hay was cut on 23rd August, the weather forecast changed from the predicted heatwave to some wetter milder weather. So it was a rush to get it dried and baled before the rain, and it was baled on 27th August just before the rain. With 710 bales out in the fields we had no chance to bring it in before it rained, so it was a case of standing the bales up and leaning them against each other to get them dry again before bringing them in. 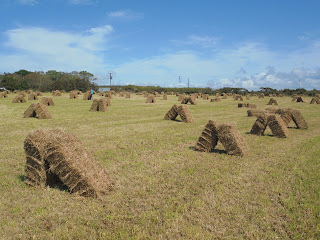 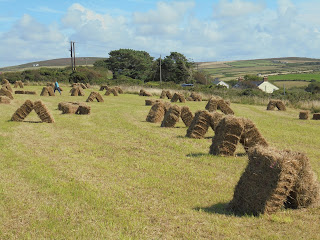 After the bales had had a few good sunny days to dry out, we brought them in on the 2nd and 3rd September, and stacked them all in the open barn, just before it rained again. We always cut our hay in August, a late summer cut, to give the wildflowers time to set seed (except ragwort which we weed out before cutting), and to provide good forage for bees and butterflies and other wildlife. 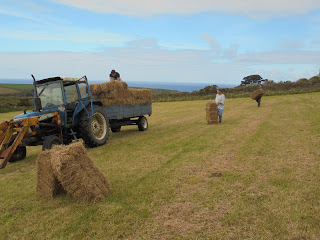 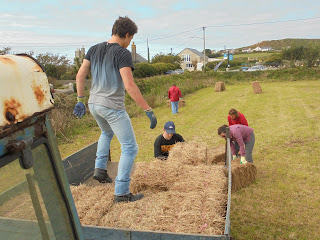 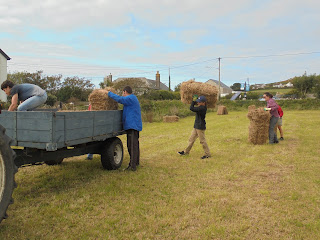 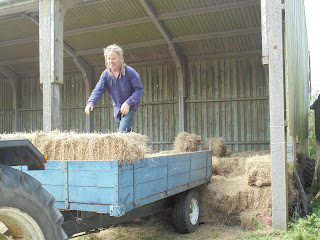 Our small-bale hay from traditional hay meadows is now for sale at the farm for £3.50 per bale.

Many many thanks to all our volunteers who helped with the hay this year - Andy, Shelley, Cameron, Ben, Ted, Callum, Kevin, Andre, Alex, Ilaria, Iris, Veronica, Virginia, and Alice and her two children. Great work!