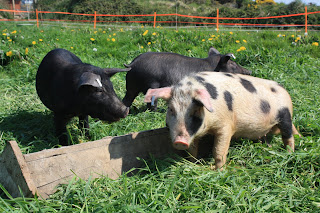 As you may have noticed, three little pigs arrived at the farm on Saturday 16th April, just in time for the EGGstravaganza. The pigs were supplied by a local farmer, 4 miles away, but they do not come from organic stock. They will be raised on organic land, and fed organic feed, so we can refer to them as "organically reared" pigs. In autumn they will be made into sausages and bacon, and sold in one-tenth-of-a-pig portions to family and friends of the community farm (i.e. their meat will not be commercially available).

Despite appearances, they are sisters. The spotted pig is called Penny. At the EGGstravaganza we asked people to write down names for the two black pigs, and a jury of volunteers today chose the suggestions of Sage and Onion for them. As the pigs are for eating, quite possible with sage and onion, their names are a reminder of their destination (the dinner plates of St. Just), and make the connection between living farm animals and their meat as a human food source. We hope they'll be very happy here in their six months of life.
Posted by hugh at 9:25 AM