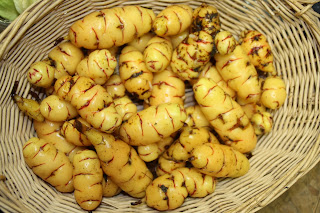 Oca is a South American tuber that has been described as one of the "lost crops of the Incas". When boiled it is very similar to a new potato, but has a subtle lemon flavour. This is thanks to oxalic acid, because oca is the root of Oxalis tuberosa. Its closest UK relative is wood sorrel, whose leaves have a tart lemon flavour and are good for adding zing to a wild salad.

It is the first time we have grown oca on the farm. We bought five small tubers last year from the Real Seed Catalogue, which gave us four plants, and from those we harvested 2.5 kg. We have kept half of this for planting again this year, and the other half has almost sold out in our shop already.

This strain of oca is called "Dylan Keating" after a friend of ours who used to have a commercial smallholding at Badger's Cross above Penzance. He was given some oca by his brother, found that it grew well here in Penwith, and sent some to the Real Seed Catalogue.
Posted by hugh at 1:36 PM