Yesterday, 26th January, as the latest winter storm hit Britain, a hardy group of volunteers came to Bosavern Community Farm to coppice one line of our willow windbreak along the south side of the market garden. The day was led by Greg Humphries, a local woodsman and artist, and the six members of the Wild Penwith Volunteers were organised by David May - this is the fifth time in six years they have teamed up to come and coppice at Bosavern - and our current wwoofers Ziv and Maki were joined by Nikki to make 10 coppicers all in. 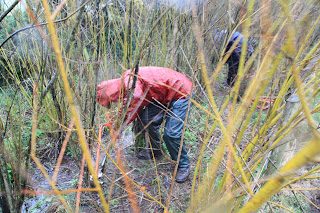 We have three lines of willow around our market garden, and most years we coppice one line and make whips for planting willow on other parts of the farm - the strong winds we endure are probably the single biggest problem when trying to grow veg in West Penwith. This year we processed the cut willow into four products: whips for planting around the edge of the chicken field (where we will grow crops in 2017/18/19); long thin lengths for a weaving workshop later in the year; thicker pieces for firewood for the farmhouse woodburner; and all the little trimmings for a habitat pile in the corner of the field. 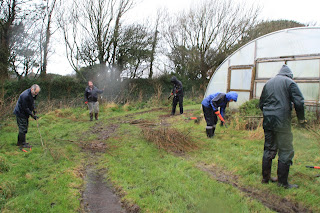 Luckily all the work was over by 1pm, and everyone could go home and get dry. It was a great effort to turn up and get the job done in very bad weather conditions, so many many thanks to all who did so!

There are more photos on our twitter feed @bosavernfarm and also on the Cornwall Wildlife Trust twitter feed.