On Monday 8th February, winds of 71.4 mph were recorded just over the road from the farm. Our oldest polytunnel, the Mothership, had a gaping hole ripped in the plastic over the top, and will need re-skinning later in the year when the weather calms down and warms up. She had already been damaged over Christmas, and patched up, but this time she's beyond repair. 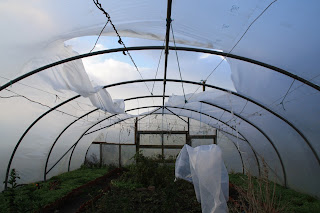 The plastic was only two years old, which is disappointing. We cut the large flaps of plastic away to stop them catching the wind and potentially damaging the frame, then kept well away out of concern for our safety for the rest of the day. 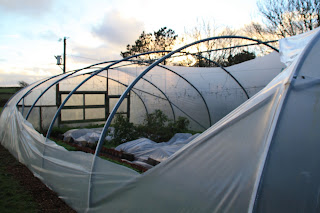 Now we hope that the crops inside the polytunnel will survive the rest of this harsh winter without too much damage, especially our perennial rocoto chilli bushes. We were more concerned for our strawberry beds, so we have used the sheets of plastic cut from the tunnel to cloche them, to try to keep the worst of the weather off. 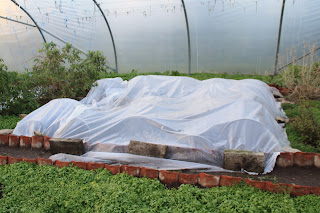 No other major damage has occurred (that we know of), although some areas of the market garden are under water.

But this winter's worst storm has given us a name for our seventh polytunnel, erected last spring - Imogen - and here she is full of salad (well, we picked 8 kg of leaves today so she's actually looking a bit sparse...). In the photo you can see where rain has driven in through the gaps around the doors at either end. 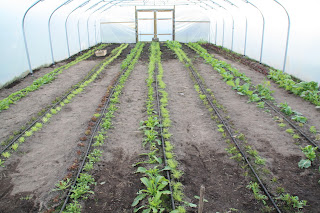