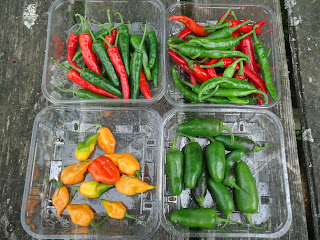 This year we have grown five chilli varieties, four of which are shown above. The fifth variety, rocoto, is just starting to produce now, having been killed off by the snow in March - they are perennials so we have had to start again using seeds saved from last year.

Jalapeno - bottom right, our mildest chilli, scoring 2,500 to 5,000 on the Scoville scale, most commonly used on pizza toppings (a chipotle is a smoked jalapeno).

Cayanetta - top left, a mild chilli, almost identical in appearance to the Ring Of Fire but with a rounded rather than pointed end, scoring 20,000 Scoville Heat Units.

All are available in our shop (and at farmers' markets) at only 10p each. 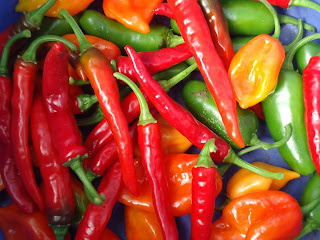